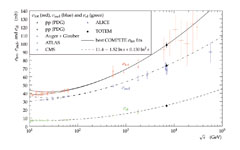 The TOTEM measurement of the total cross-section of the proton at the 7 TeV centre-of-mass energy of 98 ± 3 mbarn is shown together with results from previous measurements and from cosmic rays.

The proton, one of the basic building blocks of the atomic nuclei, is a dynamic and complex system: its sub-components and their interactions keep it together in a very dynamic way. The inner structure of protons can be studied by observing how they interact with each other, which implies measuring the total cross-section of the proton-proton interactions. To measure it, the TOTEM experiment uses the fact that the total cross-section can be related to the elastic forward scattering amplitude.

Due to the tiny scattering angles the protons have to be measured very close to the CERN LHC beams, requiring custom-designed silicon detectors with full efficiency up to the physical edge. The measurement was performed in a dedicated run with special beam optics that made the angular beam spread in the interaction point small compared to the scattering angles.

The TOTEM experiment has confirmed the increase with energy of the proton-proton total cross-section by a (98± 3) mbarn result at the so far unexplored energy of the LHC. This phenomenon was expected from previous measurements performed at energies 100 times smaller at the CERN ISR in 1972. It is remarkable that the early indirect cosmic ray measurements are in good agreement with the new precise TOTEM value.