Leidenfrost propulsion on a ratchet (Vol. 43 No. 1)

Leidenfrost propulsion on a ratchet (Vol. 43 No. 1) 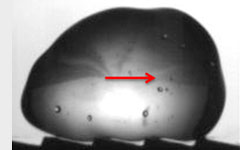 Levitating Leidenfrost drop on a hot ratchet: a force acts on the drop, which deflects a fiber plunging in it.

The Leidenfrost phenomenon is observed when depositing liquids on solids much hotter than their boiling point. Liquids then levitate on a cushion of their own vapour, and slowly evaporate without boiling, due to the absence of contact with the substrate. The vapour cushion also makes liquids ultra-mobile, and Linke discovered in 2006 that Leidenfrost drops on a hot ratchet self-propel, in the direction of "climbing" the teeth steps. The corresponding forces were found to be 10 to 100 µN, much smaller than the liquid weight, yet enough to generate velocities of order 10 cm/s.

The origin of the motion was not really clear, despite stimulating propositions in Linke's original paper. As a first step, it was reported in 2011 by Lagubeau et al. that disks of sublimating dry ice also levitate and self-propel on hot ratchets: liquid deformations are not responsible for the motion. However, the levitating object in all these experiments squeezes the vapour below, and the resulting flow might be rectified by the asymmetric profile of the ratchet. The key question was not only to check this assumption, but also to determine in which privileged direction the vapour flows. By tracking tiny glass beads in the vapour, it was shown that rectification indeed takes place, along the descending slope of the teeth - the vapour escaping laterally once reaching the step of the teeth. Hence the levitating body is entrained by the viscous drag arising from this directional vapour flow. Goldstein et al. reached a similar conclusion in a paper to appear in the Journal of Fluid Mechanics. Many questions however remain: ratchets also generate special frictions (the liquid hits the teeth as it progresses), and the optimal ratchet (maximizing the speed of these little hovercrafts) has not yet been designed.