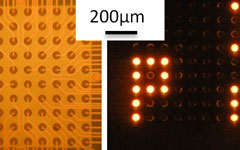 Longer wavelength InGaN emitters (~600nm) are important for some potential applications such as optoelectronic tweezers and visible light communication. The primary obstacle for developing InGaN light-emitting diodes (LEDs) at longer wavelengths, however, is because it is difficult to incorporate a high indium composition (for extending the emission wavelength) while maintaining good epitaxial quality. Indium in high proportion tends to aggregate. High indium InGaN structures also show strong piezoelectric fields, which in turn induce a reduced wavefunction overlap between electrons and holes, and a consequently weakened emission. To overcome these effects, new epitaxial InGaN structures of high-indium content are grown, in which an electron reservoir layer is introduced to enhance the indium incorporation and the light emission, but retain conventional (1000) orientation.

Photoluminescence measurements reveal that the emission wavelengths of these high-In quantum well structures can be tuned from 560nm to 600nm, depending on actual indium composition. Yellow-green and amber devices in an array-format are developed based on these wafer structures, where each LED pixel can be individually addressable. Power measurements indicate that the power density of the yellow-green (amber) device per pixel is up to 8W/cm2 (4.4 W/cm2), much higher than that of conventional broad-sized LEDs made under the same condition, and nearly an order higher than that required by optoelectronic tweezers, validating the feasibility of using these micro-LEDs for tweezing. Nevertheless, it is found that the emission wavelength is strongly blueshifted upon injection current increase, up to ~50nm. Numerical simulations reveal that this is caused by screening of the quantum Stark effect and a band filling effect, thus further optimisation of the growth conditions and epitaxial structures is needed.