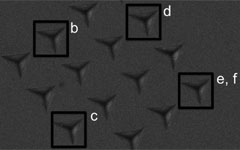 It is now possible to simultaneously create highly reproductive three-dimensional silicon oxide nanodots on micrometric scale silicon films in only a few seconds. The present study shows that one can create a square array of such nanodots, using regularly spaced nanoindents on the deposition layer, that could ultimately find applications as biosensors for genomics or bio-diagnostics.

A process called atmospheric pressure plasma-enhanced chemical vapour deposition is used. This approach is a much faster alternative to methods such as nanoscale lithography, which only permits the deposition of one nanodot at a time. It also allows the growth of a well- ordered array of nanodots, which is not the case of many growth processes. In addition, it can be carried out at atmospheric pressure, which decreases its costs compared to low-pressure deposition processes.

One goal was to understand the self-organization mechanisms leading to a preferential deposition of the nanodots in the indents. By varying the indents' interspacing, they made it comparable to the average distance travelled by the silicon oxide particles of the deposited material. Thus, by adapting both the indents' spacing and the silicon substrate temperature, they observed optimum self-ordering inside the indents using atomic force microscopy.

The next step will be to investigate how such nanoarrays could be used as nanosensors. It is planed to develop similar square arrays on metallic substrates in order to better control the driving forces producing the highly ordered self-organisation of nanodots. Further research will be needed to give sensing ability to individual nanodots by associating them with probe molecules designed to recognise target molecules to be detected.