How Ni-Ti nanoparticles go back to their memorised shape (Vol. 43 No. 1)

How Ni-Ti nanoparticles go back to their memorised shape (Vol. 43 No. 1) 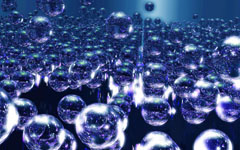 Can metals remember their shape at nanoscale, too?

Metallic alloys can be stretched or compressed in such a way that they stay deformed once the strain on the material has been released. Only shape memory alloys, however, can return to their original shape after being heated above a specific temperature. For the first time, the authors determine the absolute values of temperatures at which shape memory nanospheres start changing back to their memorised shape - undergoing so-called structural phase transition, which depends on the size of the particles. To achieve this result, they performed a computer simulation using nanoparticles with diameters between 4 and 17 nm made of an alloy of equal proportions of nickel and titanium.

Using a computerised method known as molecular dynamics simulation, it is possible to visualise the transformation process of the material during the transition. As the temperature increases, it is shown that the material's atomic-scale crystal structure shifts from a lower to a higher level of symmetry. The strong influence of the energy difference between the low- and high-symmetry structure at the surface of the nanoparticle, which differs from that in its interior, explains the transition.

Most of the prior work on shape memory materials was in macroscopic scale systems. Potential new applications include the creation of nanoswitches, where laser irradiation could heat up such shape memory material, triggering a change in its length that would, in turn, function as a switch.