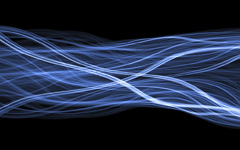 This article presents a theory for a quantum cloning machine able to produce several copies of the state of a particle at atomic or sub-atomic scale, or quantum state. It could have implications for quantum information processing methods used, for example, in message encryption systems.

Quantum cloning is difficult because quantum mechanics laws only allow for an approximate copy-not an exact copy-of an original quantum state to be made, as measuring such a state prior to its cloning would alter it. The present work shows that it is theoretically possible to create four approximate copies of an initial quantum state, in a process called asymmetric cloning. The authors have extended previous work that was limited to quantum cloning providing only two or three copies of the original state. One key challenge was that the quality of the approximate copy decreases as the number of copies increases. It appears possible to optimise the quality of the cloned copies, thus yielding four good approximations of the initial quantum state. The present quantum cloning machine is shown to have the advantage of being universal and therefore able to work with any quantum state, ranging from a photon to an atom.

Asymetric quantum cloning has applications in analysing the security of messages encryption systems, based on shared secret quantum keys. Two people will know whether their communication is secure by analysing the quality of each copy of their secret key. Any third party trying to gain knowledge of that key would be detected as measuring it would disturb the state of that key.