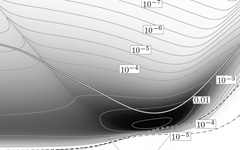 Recent experimental demonstrations of long-lived quantum coherence in certain photosynthetic light-harvesting structures have launched a flurry of controversy over the role of coherence in biological function. An ongoing investigation into the astonishingly high-energy transport efficiency of these structures suggests that nature takes advantage of quantum coherent dynamics.

We inquire on the fundamental principles of quantum coherent energy transport in ensembles of spatially disordered molecular networks subjected to dephasing noise. De-phasing reduces the coherence between individual network nodes and has already been shown to assist transport substantially provided that quantum coherence is disadvantageous by reason of destructive interference, e.g. in the presence of disorder and quantum localization. In a statistical survey, we map the probability landscape of transport efficiency for the whole ensemble of disordered networks, in search of specially adapted molecular conformations that nature may select in order to facilitate energy transport: We thus find certain optimal molecular configurations that by virtue of constructive quantum interference yield the highest transport efficiencies in the absence of dephasing noise. Moreover, the transport efficiencies realized by these optimal configurations are systematically higher than the noise-assisted efficiencies mentioned above. As discussed in the article, this defines a clear incentive to select configurations for which quantum coherence can be harnessed.