Double ionization with absorbers (Vol. 43 No. 1)

Double ionization with absorbers (Vol. 43 No. 1) 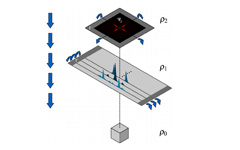 In quantum dynamics, unbound systems, such as atoms being ionised, are typically very costly to describe numerically as their extension is not limited. This problem should be reduced if one could settle for a description of the remainder of the system and disregard the escaping particles. Removing the escaping particles may be achieved by introducing absorbers close to the boundary of the numerical grid. The problem is, however, that when such "interactions" are combined with the Schrödinger equation, all information about the system is lost as a particle is absorbed. Thus, if we wish to still describe the remaining particles, a generalization of the formalism is called for. As it turns out, this generalisation is provided by the Lindblad equation.

This generalised formalism has been applied to calculate two-photon double ionisation probabilities for a model helium atom exposed to laser fields. In the simulations, the remaining electron was reconstructed as the first electron was absorbed. Since there was a finite probability for also the second electron to hit the absorber at some point, the system could, with a certain probability, end up in the vacuum state, i.e. the state with no particles. As this probability was seen to converge, it was interpreted as the probability of double ionisation.

The validity of this approach was verified by comparing its predictions with those of a more conventional method applying a large numerical grid.