Entanglement or separability: factorisation of density matrix algebra (Vol. 43 No. 1)

Entanglement or separability: factorisation of density matrix algebra (Vol. 43 No. 1) 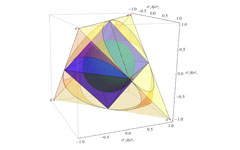 The present theoretical description of teleportation phenomena in sub-atomic scale physical systems proves that mathematical tools let free to choose how to separate out the constituting matter of a complex physical system by selectively analysing its so-called quantum state. That is the state in which the system is found when performing measurement, being either entangled or not. The state of entanglement corresponds to a complex physical system in a definite (pure) state, while its parts taken individually are not. This concept of entanglement used in quantum information theory applies when measurement in laboratory A (called Alice) depends on the definite measurement in laboratory B (called Bob), as both measurements are correlated. This phenomenon cannot be observed in larger-scale physical systems.

The findings show that the entanglement or separability of a quantum state -whether its sub-states are separable or not; i.e., whether Alice and Bob were able to find independent measurements - depends on the perspective used to assess its status.

A so-called density matrix is used to mathematically describe a quantum state. To assess this state's status, the matrix can be factorised in different ways, similar to the many ways a cake can be cut. The Vienna physicists have shown that by choosing a particular factorisation, it may lead to entanglement or separability; this can, however, only be done theoretically, as experimentally the factorisation is fixed by experimental conditions.

This is applied to model physical systems of quantum information including the theoretical study of teleportation, which is the transportation of a single quantum state. Other practical applications include gaining a better understanding of K-meson creation and decay in particle physics, and of the quantum Hall effect, where electric conductivity takes quantified values.