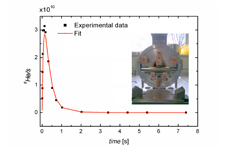 ISOLDE production unit equipped with a spallation neutron source along the target oven. Fast release of 6He anti-neutrino emitters, produced by a BeO target with the CERN’s proton beam.

Nuclear structures of short-lived radioisotopes are nowadays investigated in large scale facilities based on in-flight fragmentation or isotope separation online (ISOL) methods. The ISOL technique has been constantly extended at CERN-ISOLDE, where 1.4GeV protons are exploited by physicists to create radioisotopes in thick materials; these exotic nuclei are released and pumped online into an ion source, producing a secondary beam which is further selected in a magnetic mass spectrometer before post-acceleration.

Ten years ago a proposal to inject suitable ISOL beams into the CERN accelerator complex and to store these isotopes in a decay ring with straight sections was proposed for a ”Β-beam facility”; intense sources of pure electron neutrinos - emitted when such isotopes decay - are directed towards massive underground detectors for fundamental studies such as observation of neutrino flavour oscillations and CP violation.

Our paper reports on the experimental production of the anti-neutrino emitter 6He. We use a two-step reaction in which the proton beam interacts with a tungsten neutron spallation source. The emitted neutrons intercept a BeO target to produce 9Be(n,a)6He reactions. The neutron field was simulated by Monte-Carlo codes such as Fluka and experimentally measured. The large predicted 6He production rates were also experimentally verified. Fast 6He diffusion, driven by the selection of a suitable BeO material, could be demonstrated, leading to the highest 6He beam rates ever achieved at ISOLDE. These results provide a firm experimental confirmation that the Β-beam will be able to deliver enough anti-neutrino rates using a neutron spallation source similar to ISIS-RAL (UK). This work is now being completed by the experimental validation of the 18Ne neutrino source design.