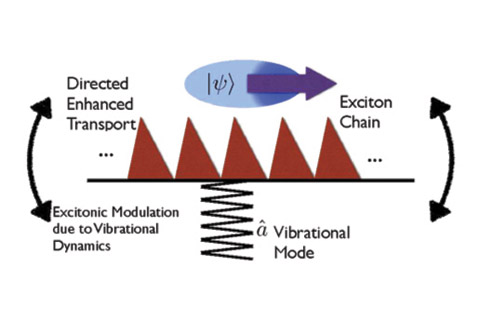 Energy transport at the nano/quantum scale has a long history of research, with significant interest being paid in the debate over whether quantum coherence plays a role in the efficiency of exciton transport in photosynthetic complexes. Much attention has also turned to improving energy transport for man-made energy harvesting systems and nanodevices, such as in solar cells and quantum dot arrays.

Achieving directed quantum transport permits far superior collection of the deposited energy. The study of quantum ratchets shows how directed energy transport is achievable in quantum dot arrays. Recent experimental work on light harvesting molecules have implicated the role of discrete mechanical modes in enhancing the energy transport through dipole arrays, but say less about directed transport. Here the authors bring together these two apparently unrelated models to present a scheme for a new type of quantum engine. Utilising both excitonic and vibrational motions it is shown that the resulting coherent mechanical dynamics causes directed enhanced energy transport towards one end of the exciton chain. The quantum engine is autonomous, requiring no external pumping or modulation but works off the initial charge on the exciton chain which excites the vibrational motion.