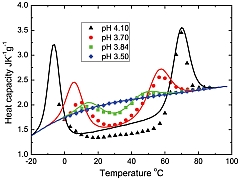 Physicists have published a new theory explaining the mechanism of protein folding and unfolding in water.

The authors have produced a new theoretical study of a protein macromolecules changing from a coil structural formation to a globular one. Their statistical mechanics model describes for the first time the thermodynamic properties of real proteins in aqueous environments using a minimal number of free physical parameters.

In this work, the authors confirmed the validity of their theoretical calculation of dependencies of the protein heat capacities on temperature by comparing it with the corresponding experimental measurements for two proteins, namely an enzyme called staphylococcal nuclease and an oxygen and iron carrier protein called metmyoglobin. Sudden changes in temperature could result in the loss of proteins’ three-dimensional structure, and of their function. Thus, these findings could contribute to our understanding of high-energy ion therapy for biological cells.