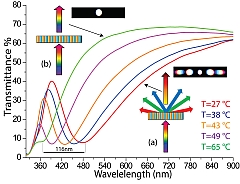 Spectral response versus temperature and schematic rapresentation of the filter mechanism in states ON (a) and OFF (b).

We realized a free-space, polarization sensitive, broadband, widely tunable, optical filter by exploiting a micro-composite holographic grating made of polymer slices alternated with films of aligned Nematic Liquid Crystals (NLC). Impinging probe light (p-polarized) experiences a refractive index modulation (Δng); thus, it is transmitted/diffracted and, consequently, angularly separated into its fundamental colours, according to the sketch of Figure (a). This diffraction effect induces a band-gap behaviour (filter in the ON state) in the transmission properties featured by the structure (Figure (a), red curve) and in the corresponding far field diffraction pattern. Both electric fields and temperature variations can be exploited to tune the position of the diffractive band-gap; in particular, by increasing the sample temperature, a nematic to isotropic transition of the NLC component gradually reduces Δng, with a resulting blue shift and a gradual suppression of the diffraction band (Figure (a), green curve). Under these conditions, light is almost completely transmitted (filter in the OFF state) as shown in the far field diffraction pattern and in the corresponding sketch reported in Figure (b).