Copenhagen interpretation as an emergent phenomenon (Vol. 44 No. 6)

Copenhagen interpretation as an emergent phenomenon (Vol. 44 No. 6) 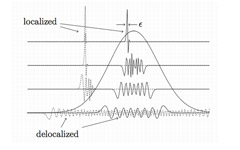 The diagram illustrates the effectiveness of coarse graining on two particular external states as decoherence proceeds. The final states at the top are suitably localised.

This work shows that a successful interpretation of quantum mechanics can be seen to emerge by taking the actual, or internal, states of a sub-system to correspond to one the eigenvectors of its reduced density matrix. Previous work has highlighted serious objections to such a modal type interpretation because it apparently leads to macroscopic superpositions and physically unacceptable instabilities near degeneracies. We show that both these problems are solved if the sub-system consists of a large number of coarse-grained degrees of freedom which is natural as real measuring devices have both finite spatial and temporal resolution. What results is an interpretation in which both decoherence and coarse graining play key roles and from which the rules of the Copenhagen Interpretation are seen to emerge in realistic situations. In this interpretation a measurement process is smooth but results in internal states that corresponds to the distinct outcomes ones expects. Previous work has suggested that the internal states of a device measuring the position of a particle would be spread out macroscopically.