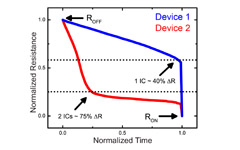 Device 1 is the conventional memristor design: electrodes are separated by a single ionic conductor insulator. Device 2 utilizes the multi-layer design, which forms a quasi-uniform conduction front. The simulated resistive switching of the multilayer memristor occurs largely within the linear regions where tuning can occur.

Memristive devices are reshaping computing paradigms as one of the leading candidates for the future of computer memory. In conventional memristors, metallic filaments form and extend stochastically under applied electrical bias, producing a highly non-uniform conduction front. This produces devices with large variations in electrical properties that are difficult to tune.

Here, we introduce and simulate a specialized multi-layered device structure with alternating ionic conductor layers that enables the development of a quasi-uniform conduction front. This reduces catastrophic switching (Fig. 1b) in which devices rapidly exit the linear-tuning region and switch state. In our simulations of a single layer memristor, the majority of the resistance change during a switching event occurs catastrophically, while in the multilayer device the majority of switching occurs in the linear tuning region. This ability to fine-tune switching events in devices is an important property for multi-bit memory and neuromorphic computing applications.