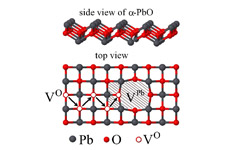 Polycrystalline Lead Oxide (PbO) is one of the most promising materials for application in radiation medical imaging. At the current stage of technology, electronic grade PbO is not achievable because of large defect concentration. Defects act as traps for x-ray generated charge carriers during their transit across PbO layers: average distance drifted before trapping is smaller than layer thickness. Therefore, suppression of the effect of defects on carrier transport is an important challenge in PbO technology.

In metal oxides, vacancies are the main source of traps. The authors have shown that in thermally deposited PbO layers both Pb and O vacancies appear primarily in charged states of opposite sign. As a result, neighbouring vacancies can form neutral pair, which is no longer act as trapping centre. This finding offers a practical way to improve the transport properties. The post-growth annealing would initiate migration of the O vacancies towards Pb vacancies and facilitate their merging and neutral pair formation. The reduction in an amount of ionized centres increases carrier mobility and suppresses recombination thus improving x-ray generated charge collection.