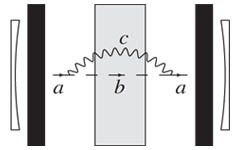 The incoming atom a emits a virtual photon c and enters an excited state b. After traversing the barrier they recombine and return to the original state. The mirrors on either side represent an optical cavity used to enhance the coupling of photons to the atom. The black walls denote potential barriers blocking both a and b, confining the atom and preventing contact with the mirrors.

It is a fundamental property of quantum field theory that averaging over quantum fluctuations results in an effective theory that is non-local. Furthermore, it is possible that this effect can be demonstrated using a cavity quantum electrodynamics setup. In the proposed configuration (sketched in figure) the effective non-locality becomes evident in that an atom has a finite probability to traverse an arbitrarily high potential barrier. The atom, a, can "split" into a virtual excited state, b, and a virtual photon, c, which do not interact with the barrier, and can consequently cross it and recombine into the original atomic internal state. This so-called "tunnelling of the third kind" is distinct from regular quantum tunnelling (the "first kind") in that it relies upon the many-body interactions inherent to quantum field theory but absent from non-relativistic quantum mechanics; it is a purely quantum field theoretic effect.

Aside from its novelty as a gedankenexperiment, the process has the potential to stimulate some very interesting experiments in quantum optics and cold atom physics. Moreover, it may serve as a demonstration for "light-shining-through-walls" experiments that use comparable effects (real particle conversion - "tunnelling of the second kind") to search for particles beyond the Standard Model.

Spotting the invisible cracks in wind turbines (Vol. 44 No. 4) 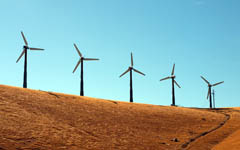 Wind turbines can be weakened by unsuspected damages. (Credit: kovik)

A new approach is available for real-time monitoring of the structural health of wind turbine components during exposure to turbulences. The method is developed for analysing the elastic characteristics of mechanical structures subjected to disturbances, akin to the turbulences affecting wind turbines.

A significant percentage of the costs of wind energy is due to wind turbine failures, as components are weakened under turbulent air flow conditions and need to be replaced. The challenge for the team was to find a method for detecting fatigue in the wind turbines’ parts without having to remove each of the components and while the turbine is in operation. Until now, standard methods have relied on so-called spectral analysis, which looks at the different frequency response. But these measurements are distorted by the turbulent working conditions and often only detect really major damages.

Microgels behaviour under scrutiny (Vol. 44 No. 4)

A new study explores the counter-intuitive behaviour of a microgel composed of soft polymer blobs with the capability of behaving like dense emulsions or granular materials The authors have studied the flow of a microgel known for their intermediate behaviour between fluid and solid, confined in microchannels. They have shown, in the present study, that its behaviour under confinement differs from predictions based on standard theories. Indeed, its molecules are not only subjected to local forces, but also to neighbouring forces that affect its flow.

The authors chose to study the influence of confinement on the flow of a polymer microgel named Carbopol. It is made of jammed acrylic acid polymer blobs, typically a few microns in size, dispersed in water. They confirmed, for the first time in a microgel, that the flow properties at a local point do not depend only on the local force, but also on the dynamics of its vicinity. This has previously been shown in concentrated emulsions, granular materials and foams under confinement. 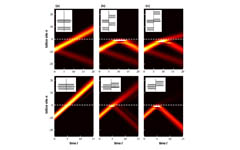 The first model demonstrating that it is possible for two particles to cross an energy barrier together, where a single particle could not, is shown here.

A new kind of so-called Klein tunnelling - representing the quantum equivalent of crossing an energy wall - is presented in a model of two interacting particles. The authors relied on an analytical and numerical study of a landmark model of interacting particles, called the Hubbard model. They predict a new type of Klein tunnelling for a couple of interacting particles confronted by an energy barrier. Even though the barrier is impenetrable for single particles, it becomes transparent when the two particles cross the energy barrier together. They expect these predictions to be confirmed experimentally in ultra-cold atoms trapped in optical lattices. If this is the case, similar quantum simulation could be a tool for emulating multiple-particle systems. 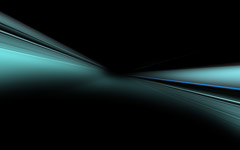 Light propagating in a vacuum travels at a speed that fluctuates due to ephemeral particle pairs. (Credit: Ilco)

New research shows that the speed of light may not be fixed after all, but rather fluctuates, while its value could be set by the total number of elementary particles in nature. Two EPJ D neighbour papers challenge established wisdom about the nature of vacuum. Vacuum is one of the most intriguing concepts in physics. When observed at the quantum level, vacuum is not empty. It is filled with continuously appearing and disappearing particle pairs such as electron-positron or quark-antiquark pairs.

In the study of article 1, the authors established, for the first time, a detailed quantum mechanism that would explain the magnetisation and polarisation of the vacuum, referred to as vacuum permeability and permittivity, and the finite speed of light. This finding is relevant because it suggests the existence of a limited number of ephemeral particles per unit volume in a vacuum. As a result, there is a theoretical possibility that the speed of light is not fixed, as conventional physics has assumed. Instead, this speed would be dependent on variations in the vacuum properties of space or time.

In the work of article 2, the other authors found that a specific property of vacuum called the impedance, which is crucial in determining the speed of light, depends only on the sum of the square of the electric charges of particles’ pair but not on their masses.  If their idea is correct, the value of the speed of light combined with the value of vacuum impedance gives an indication of the total number of charged elementary particles existing in nature.

In the thermopower of underdoped cuprates (Vol. 44 No. 4) 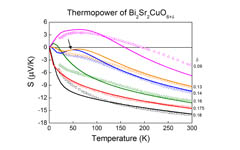 In recent years the possibility of electron-like Fermi-surface pockets in the high-Tc cuprates has become an area of intense experimental and theoretical interest. What is the origin of these pockets? Are they connected to the mysterious pseudogap, a depletion in the density of states that dominates thermodynamic and transport properties over a wide range of temperature and doping? Until now, experimental support for these pockets has been confined to samples which, in addition to pseudogap effects, exhibit a separate spin/charge stripe correlation, making their connection to the pseudogap unclear.

In the present paper we calculate the thermopower of high-Tc cuprates from the resonating-valence-bond spin-liquid model developed by Yang, Rice and Zhang, achieving an excellent match with experimental data. A key result of this work is the identification of features in the observed thermopower corresponding to electron pockets in the Fermi-surface appearing with the opening of the pseudogap. These results link the pseudogap with Fermi-surface reconstruction and will be of considerable interest to researchers using photoemission, quantum oscillations and other techniques presently engaged in efforts to detect these pockets directly.

Positronium formation in the noble gases (Vol. 44 No. 4) 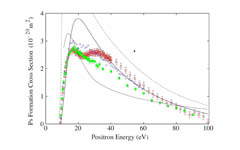 Positronium (Ps) is a neutral atom composed of an electron and its anti-particle, the positron. Since its reduced mass is essentially half that of atomic hydrogen, its binding energy is 6.8 eV. Being anti-particles, this electron-positron pair will annihilate producing gamma rays in about a tenth of a microsecond, long enough for experiments to be carried out. Ps can be formed in positron scattering from atoms and its cross section measured.

For most atoms, Ps formation has the lowest inelastic threshold. Theoretically, this is a two-centre problem (atomic nucleus and the center-of-mass of Ps) and thus difficult to calculate directly. We have simplified this problem by treating it as direct ionization with a threshold 6.8 eV below the true ionization threshold. Our method also ensures the rapid decrease in the Ps formation cross section at high energies. Even with this simple model our results for the noble gases are in much better agreement with experimental measurements than calculations based on more elaborate theories.