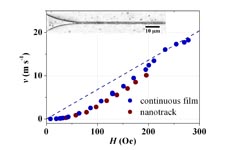 Domain-wall-propagation velocity, v, as a function of the applied magnetic field, H, in a plain Pt/Co/Pt film irradiated with He+ ions, and in a 750 nm-wide nanotrack patterned in this film. The dotted line is a linear fit to the high-field velocity values in the film. Inset: Optical picture of a 510 nm-wide nanotrack.

Magnetic domain walls are the interfaces separating magnetic domains of opposite magnetizations, which are used to store binary information in magnetic media. The current developments of magnetic data storage and processing technologies make highly desirable to control a fast and reproducible motion of these domain walls in nanoscale magnetic tracks. This can be performed using either magnetic field, or electrical current.

For this purpose, nanotracks defined in ultrathin magnetic films with out-of-plane magnetic anisotropy seem to be particularly good candidates to obtain an efficient propagation under a low excitation. However, in most of the out-of-plane metallic nanosystems that were studied up to now, domain-wall pinning on the track’s defects was shown to significantly reduce the domain-wall velocity, as compared to the one measured in the corresponding plain magnetic film.

In this work, nanotracks are etched in a Pt/Co/Pt thin film with out-of-plane magnetic anisotropy, where pinning has been artificially reduced by weak He+-ion irradiation. It is shown that in these tracks, domain walls propagate as fast and under magnetic field as low as in the corresponding plain irradiated film.

Moreover, when magnetic-field and electrical-current pulses are simultaneously applied to the track, a considerably faster magnetization reversal is observed, which is due to a Joule-heating-induced thermomagnetic effect when current flows into the track.