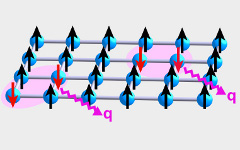 In the spin nematic state, bound pairs of magnons (down spins shown by red arrow) propagate coherently in the polarized ferromagnetic background.

Here, we investigate theoretically a microscopic mechanism for the spin-nematic ground state based on the competition of ferro- and antiferromagnetic interactions. In a strong magnetic field, local magnetic moments become completely polarized. Elementary excitations are single spin-flips or magnons. In the majority of quantum antiferromagnets spin-flips repel each other. Upon decreasing external field this leads to single-particle condensation, which can be regarded as an analogue of the Bose-Einstein condensation discovered for cold atomic gases in optical traps. Various exotic quantum states of bosonic particles find their analog in conventional magnetic structures.

The above conventional scenario changes if some of the exchange bonds are ferromagnetic. In this case, spin flips gain the interaction energy by occupying two adjacent sites. This may lead to formation of bound magnon pairs. Because of their lower energy, the bound pairs start to condense prior to the onset of single particle condensation (Fig.). We have developed the microscopic description of the Bose condensation of bound magnon pairs, which form a quantum state analogous to the condensate of electron pairs in superconductors. Our theory predicts the presence of such a spin-nematic phase in the frustrated chain material LiCuVO4. The pulsed-field measurements on LiCuVO4 and other related compounds should lead to the first observation of this exotic off-diagonal order in solid-state systems. 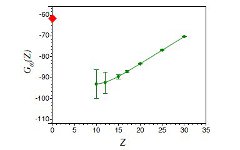 Comparison of the results of the numerical all-order calculations as a function of the nuclear charge Z (dots and solid line) and the analytical perturbative result (diamond on the y-axis) for the higher-order two-loop self-energy correction.

The results of the recent measurement of the Lamb shift in muonic hydrogen [R. Pohl et al., Nature 466, 213 (2010)] created what is now widely known as "the proton charge radius puzzle". The charge radius of the proton derived in this experiment turned out to be 4% smaller than that obtained from the Lamb shift in ordinary hydrogen. This discrepancy is very surprising, given that the underlying theory, QED, is one of the most precise and well-tested fundamental theories. Half a year has passed since the announcement of the unexpected results and theoreticians have checked and double-checked QED calculations in both muonic and ordinary hydrogen. However, despite all the efforts, no plausible ideas about the cause of the discrepancy have been suggested, and the puzzle remains unsolved.

This paper deals with the most problematic QED effect in ordinary hydrogen, the two-loop self-energy correction. It is this effect that induces the main theoretical error in the hydrogen proton charge radius. Previous calculations have demonstrated a disagreement between two different methods: the one based on the perturbative expansion in the binding nuclear field and the one including binding effects to all orders. Though this disagreement is too small to explain the puzzle, it still needs to be resolved to clarify the uncertainty of the hydrogen proton charge radius. In this paper, a new technique is developed for calculations of the two-loop self-energy diagrams treated in the mixed coordinate-momentum space. This technique increases the numerical accuracy of the results, reducing without eliminating the disagreement between the two approaches (Fig.). 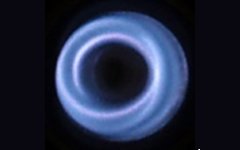 Miniaturized non-thermal jet plasmas belong to the class of microplasmas characterized by dimensions below 1 mm. They represent an emerging technique for local surface treatment at atmospheric pressure such as surface modification and the deposition of thin functional coatings (for corrosion protection or gas diffusion barrier). The deposition of films with controlled quality requires the knowledge of the basic mechanisms, both plasma kinetics and flow dynamics that sustain and stabilize the gas discharge. This calls for a measure of the plasma parameters, validated by a suitable model. The plasma source studied here is a capacitive coupled capillary jet (27.12 MHz) operating in a distinctive regime where self-organized discharge patterns develop (Fig.: time averaged top view). This discharge regime along with the plasma source geometry puts the device in a prime position for a coating process at atmospheric pressure. The paper describes a first step towards a thorough plasma physical description of the discharge dynamics and the energy transport by determining the electron concentration in the active discharge zone. Two independent approaches were used, spectroscopic measurements of the broadening of Balmer Hβ and Hγ lines and a time-dependent, 2D fluid model of a single discharge filament. Electron concentrations between 2.2 and 3.3×1014cm-3 have been obtained after separating the relevant spectral line broadening effects. The fluid model has confirmed these results. The relatively high electron concentration in the active jet zone can be explained by the contraction of the discharge into single filaments. The self-organization makes these filaments deterministic but not stochastic. Their steady behaviour furthermore supports the establishment of a larger concentration of excited atoms, especially metastable atoms, leading to enhanced ionization.

Switch and template pattern formation as in the Drosophila eye (Vol. 42, No. 1) 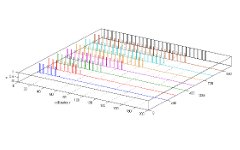 Spatio-temporal portrait of a moving front in a simple model of switch and template pattern formation. The front moves with a constant speed, leaving behind a highly non-linear, periodic pattern. (For clarity, the spatial patterns at different time points are plotted in different colours.)

Biology provides the physicist with a stunning variety of patterns to explore, and several fundamental ideas in the physics of pattern formation, such as Turing instabilities and the clock-and-wave-front mechanism, are rooted in studies of biological systems. It remains unclear, however, whether these classic concepts can explain the emergence of patterns in most biological systems, or whether new and different mechanisms remain to be discovered.

Here, the authors, at the University of Michigan, Ann Arbor, examined a spatially discrete, three variable reaction-diffusion model inspired by the interactions that create a periodic pattern of gene expression in the Drosophila eye imaginal disc. This model is capable of creating a regular pattern behind a moving front, as observed in eye discs, through a novel "switch and template" mechanism. In order to better understand this mechanism, the authors performed a detailed study of the model's behaviour in one dimension, using a combination of analytic methods and numerical searches of parameter space. Using this approach, the authors find that patterns are created robustly, provided that there is an appropriate separation of time scales and that self-activation is sufficiently strong. Moreover, the paper presents explicit expressions in this limit for the front speed and the pattern wavelength. Moving fronts in pattern-forming systems near an initial linear instability generically select a unique pattern, but the P&L model operates in a strongly non-linear regime where the final pattern depends on the initial conditions as well as on parameter values. This study highlights the important role that cellularisation and cell-autonomous feedback can play in biological pattern formation.

A very clean Fe-based superconductor might show up new ground states (Vol. 42, No. 1) 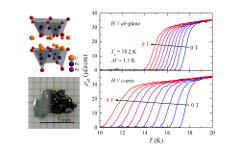 The ab-plane resistivity under magnetic fields for two different crystallographic directions of a LiFeAs single crystal grown by the Sn-flux method with Tc=18.2 K. The crystal structure and a typical picture of the grown crystals are also displayed.

Iron-based superconductors, discovered in early 2008 and exhibiting superconducting transition temperatures Tc as high as 57 K, currently draw focused attention in the condensed matter community. Among various structural forms known, LiFeAs represents the prototype of the "111'' compounds with several unique properties: superconductivity without chemical doping, thus being subject to the least disorder effect, no Fermi surface nesting for inducing an antiferromagnetic spin density wave fluctuation as a possible pairing glue for superconductivity. Moreover, the structure contains a FeAs layer sandwiched by the double Li layers so that the cleaving can be easily done in the Li surface without having surface reconstruction, an important favorable condition for surface-sensitive investigations. Due to the highly volatile nature of Li, the high quality single crystal growth has only recently been achieved. The present research reports the first successful growth of a large area single crystal of LiFeAs by using Sn flux, producing Tc = 18.2 K with a narrow transition width ΔTc = 1.1 K as well as a relatively large residual resistivity ratio, ~ 22-35. Upon measuring transport under high magnetic fields for two crystallographic directions, H // ab-plane and // c-axis, the system exhibits a moderate anisotropy of 2.3 near Tc, consistent with a prediction of a reduced anisotropy caused by correlation effects. Based on several recent proposals which point out the possible realization of a p-wave pairing symmetry and a Fulde, Ferrell, Larkin & Ovchinnikov state, it is envisioned that the present cleanest, large LiFeAs single crystal offers an unprecedented opportunity to find new, exotic ground states of correlated electron systems in the Fe-based superconductors.