A description of the jamming transition in soft particulate matter (Vol. 41, No. 6)

This paper illustrates how the tools of equilibrium statistical mechanics can help explain a different set of natural phenomena-- the physics of systems far-from-equilibrium, such as the jamming transition in granular matter. When S. F. Edwards from Cambridge University proposed a thermodynamic formulation for grains, the community of statistical physics received it as attractive and innovative. However, since there are no first principle justifications of Edwards’s ideas they were also viewed with some degree of scepticism. Since the publication of Edwards’ original work over 20 years ago, the scientific community has debated the possibility of its validity.

Edwards’ ideas consist of proposing a statistical ensemble of volume and stress fluctuations through the thermodynamic notion of entropy, compactivity and angoricity (two temperature-like variables). We find that Edwards’ thermodynamics correctly describes our numerical and theoretical study of the jamming transition (J-point).

Using the ensemble formalism we elucidate two questions regarding the jamming transition: (i) The thermodynamic approach predicts the order of the jamming phase transition by showing the absence of critical fluctuations at jamming in observables like pressure and volume. (ii) We also show that the thermodynamic viewpoint allows one to calculate the physical observables near jamming providing a characterization of jammed solids at the J-Point.

The fact that a simple set of thermodynamics postulates gives rise to the correct results for the case of granular materials driven through the jamming transition may have implications in other fields where out of equilibrium systems are the norm.

Field effect transistors of epitaxial graphene on SiC (Vol. 41, No. 6) 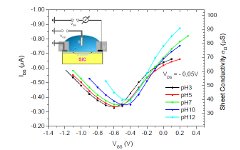 This figure shows the so-called transfer characteristics of a Solution Gated Field Effect Transistor (SGFET) fabricated on epitaxial graphene on silicon carbide. The current through the transistor channel from the source to the drain contact, driven with constant source-drain voltage, is plotted vs. the control voltage applied between the source and the gate. The minimum of each curve belongs to the situation where the Fermi level in the graphene coincides with the Dirac energy. The control voltage corresponding to this condition shows a pH dependent shift due to varying protonation of the graphene surface. Insert: Schematics of the device and the electrical circuitry adopted in the experiment.

Graphene is at date the most recognized new candidate for the electronic material of the future, the 2010 physics Nobel prize being only the ultimate indication of this fact to the public. As a two-dimensional electronic system of only one atomic layer with a correspondingly low number of charge carriers per area, it makes the material extremely sensitive to charge exchange with the outside world. This is blessing and curse at the same time: high electronic sensitivity for adsorbates is useful for chemical sensing if it can be selectively controlled; it is extremely annoying, however, for stable switching devices. In any case, understanding the interfaces between graphene, its (unavoidable) substrate onto which it is prepared, and the ambient in contact with its surface is vital for developing electronic devices based on the material.

The article at hand is focussing on this topic, adopting a special transistor design, the so-called solution gated field effect transistor, for investigating epitaxial graphene on silicon carbide in contact with an aqueous medium. The detailed analysis of the device’s transfer characteristics yields a surprisingly high charge carrier mobility in the graphene sheet, but also reveals the important role of silicon carbide surface states at the graphene interface.

The well-understood mechanism of muon-catalyzed nuclear fusion is used for a fundamental understanding of H2O2 catalysis by nanogold, including the substantial enhancement by Au-Pd. Consider the muon-catalyzed fusion using t and d. At the Ramsauer-Townsend (R-T) minimum of the dµ and tµ elastic scattering, dtµ molecules form through strong resonances. The Coulomb barrier shrinks and d-t fusion results. In gold catalyzed H2O2 the Au- anion is first formed at the R-T minimum of the electron-Au elastic cross section. Single and double water molecules can attach to the Au- anion through strong resonances with large rates forming Au-(H2O)1 and Au-(H2O)2 anion-molecule complexes. The Coulomb barrier shrinks. Because the experiment used nanogold supported on Fe2O3, a chemical reaction between H2O and O2 resulted in H2O2 formation, releasing the Au- catalyst.

A similar analysis applies to the electron-Pd elastic scattering but with the caveat that the Pd electron affinity is slightly smaller than and R-T minimum is deeper than and extends beyond that of gold. Hence, this rich environment in minima and resonances facilitates attachment of water molecules to Au- and Pd- anions, yielding H2O2 through multiplicative catalyses.

Electron-electron correlations and core-polarization interactions are crucial for the existence and stability of most negative ions. These physical effects are embedded in our calculations. Indeed, atomic negative ions play an essential role in cold nuclear fusion and in catalysis, a chemical reaction. Au, Pt, Pd and Y atoms can be used in various combinations.

This discovery ushers in new frontiers of efficient design and synthesis of novel functional compounds and catalysts for various chemical reactions, impacting many industries. The controversial Fleischmann–Pons "cold fusion" experiment can now be understood. It used Pt-Pd electrodes and has generated attention in recent APS NEWS articles.

Nernst effect and diamagnetic response in superconducting cuprates (Vol. 41, No. 6)

One of the central puzzles of the high-temperature cuprate superconductors is the nature of the pseudo-gap regime that extends from the parent Mott insulator to at least optimal doping and up to several hundred degrees Kelvin. Though it is unlikely that the entire pseudo-gap region is directly related to superconductivity, there is compelling experimental evidence of anomalously strong superconducting fluctuations within the pseudo-gap.

We examine the possibility that the experimentally observed enhancement of superconducting fluctuations above the superconducting transition temperature in the underdoped cuprates is caused by stripes -- an intrinsic electronic inhomogeneity, common to hole-doped cuprates. By evaluating the strengths of the diamagnetic response and the Nernst effect within a striped SC model, we find results that are qualitatively consistent with the experimental observations. We make a prediction for anisotropic thermopower in detwinned samples that can be used to further test the proposed scenario.

Nernst effect and diamagnetic response in a stripe model of superconducting cuprates
I. Martin and C. Panagopoulos, EPL, 91, 67001 (2010)
[Abstract] 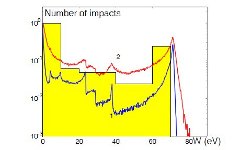 Electrical breakdown (multipactor) constitutes a severe problem in many modern microwave systems, e.g space borne communication equipment. The breakdown discharge tends to generate noise, change the device impedance, heat the device walls and may permanently damage the devices. The basic physics involved in the multipactor breakdown phenomenon is well known. However, new applications give rise to situations where previous results concerning breakdown are not applicable. The concomitant uncertainties in predicted breakdown power levels makes it necessary to allow for large safety margins in device specifications and/or to use expensive test procedures.

To improve the situation, a strong effort has been made within a close collaboration between Centre National d’Etudes Spatiales in Toulouse, France, Chalmers University of Technology, Gothenburg, Sweden, Institute of Applied Physics, Nizhny Novgorod, Russia and General Physics Institute, Moscow, Russia. The present paper reports on recent results obtained for coaxial waveguides, which are commonly used for transmission of microwaves. A comprehensive analysis is made of multipactor breakdown thresholds in such structures using theoretical modelling and numerical simulations, which are corroborated with results of detailed experiments.

The results provide new knowledge and prediction capability concerning multipactor breakdown in microwave systems involving coaxial waveguides and should be an important input for an upgrading of the document for European Cooperation for Space Standardization.

The renewed interest in the foundations of quantum statistical mechanics in recent years has led us to study John von Neumann's 1929 article on the quantum ergodic theorem (QET). We have found this almost forgotten article, which until now has been available only in German, to be a treasure chest, to be much misunderstood and very relevant to the recent discussion on the general and abstract reasons why, and the exact sense in which, an isolated macroscopic quantum system will approach thermal equilibrium from (more or less) any initial state. In his paper, von Neumann studied the long-time behaviour of macroscopic quantum systems. His main result, the QET, expresses so-called "normal typicality": for a typical finite family of commuting macroscopic observables, every initial wave function ψ(0) from a micro-canonical energy shell so evolves that for most times t in the long run, the joint probability distribution of these observables obtained from ψ(t) is close to their micro-canonical distribution. 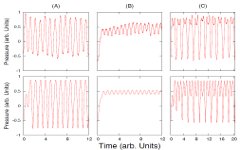 The average activity of a large set of forced, globally coupled excitable units fits the subtleties of the air pressure patterns used by domestic canaries during their song. Each excitable unit is the dynamical caricature of excitatory and inhibitory neural subpopulations in the neural song pathway. Upper panels show different experimental gestures. Lower panels display the simulations.

Many motor patterns in biology are surprisingly simple, particularly taking into account that they are generated by complex neural networks. During song, for example, some songbirds have to generate periodic fluctuations in their air sac pressure and syringeal muscle tension in order to achieve sounds with the adequate acoustic properties. For the case of domestic canaries, the different respiratory patterns used during song were found to be sub-harmonic solutions of a simple, low dimensional dynamical system. Yet, these gestures are generated by thousands of neurons operating in a non-synchronous regime. How can the average activity present the precise, non-trivial features of the solutions of a low dimensional nonlinear dynamical system?

Inspired by this example, we address the general issue of the emergence of low dimensional, non-trivial dynamics out of large, complex interacting units.

In the spirit of classical statistical mechanics, the equations obeyed by the order parameter of a population of globally coupled nonlinear units are derived. The analysis allows showing that non-trivial yet low-dimensional dynamics is possible in average, even in a non-synchronic regime, providing a new mechanism for dimensionality reduction in the dynamics of complex systems.