Astrophysics in lab via collisions of heavy systems (Vol. 43 No. 4) 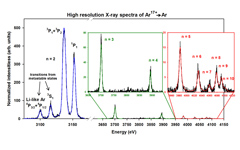 Collisions between slow highly charged ions and atoms are one of the most common fundamental processes in space. The consequent emitted light is used to diagnose the relative abundance of constituents in intergalactic clouds and comets. During the collision, the projectile-ions capture, in a highly excited-state, from one to many target-electrons. By a series of atomic cascades the electrons "tumble" from the very high atomic levels onto the ground state through multiple and complex pathways. These cascades lead to photon and/or electron emissions. The accurate analysis of the light (from UV to hard X) emitted during the interaction provides direct insights into the early stages of capture mechanisms.

Until now, for systems involving a large number of electrons, only low-resolution X-ray spectra recorded with solid state detectors were available. In the present work, the contribution of single-electron capture from multiple-capture processes in the X-ray emission have been successfully disentangled for an Ar17+ projectile colliding with N2 or Ar gaseous target at v=0.53 a.u.

Thanks to an accurate calibration of the spectrometers and a complete determination of the ion beam-gas target overlap, absolute X-ray emission cross section has been extracted with a significant improvement in uncertainty. Using a mosaic crystal spectrometer, 2 orders of magnitude in resolving power have been reached. The whole He-like Ar16+ Lyman series from n = 2 to 10 has been resolved as well as the fine structure of 1s2l → 1s2 transitions. The role of single-electron capture, leading to transitions from n = 7 to 10 levels, has been clearly discriminated from multiple capture processes that populate lower lying states. Furthermore, a precise determination of the influence of metastable states emphasizes that transposition of the measurements via ’laboratory ion-atom collisions’ towards interpretation of astrophysical spectra should be made with caution.