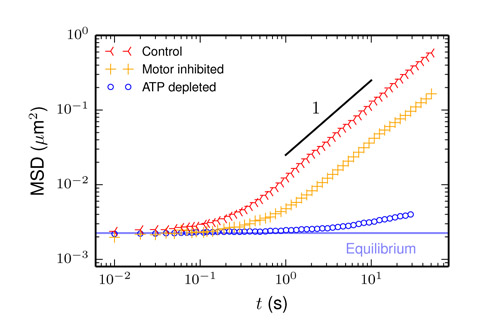 Living cells operate far from equilibrium due to the permanent injection of energy provided by ATP supply. The dynamics of the intracellular components is driven by both thermal equilibrium fluctuations, and active stochastic forces generated by the molecular motors.

To sort out genuine nonequilibrium fluctuations from purely thermal effects, we inject tracer particles in ATP depleted cells. By testing the fluctuation-dissipation theorem (FDT), we identify these cells as an equilibrium-like reference in which the tracers remain locally confined by the elastic cytoskeletal network that permeates the cytoplasm. In contrast, we highlight a violation of the FDT and a diffusion-like motion at long time scales in untreated and selective motor inhibited cells. Removing the thermal contribution in the tracer fluctuations, we estimate the spectrum of the active forces. Eventually, we report non-Gaussian tails in the tracer displacement distribution as a result of directed motion events.

We recapitulate theoretically the observed fluctuations by modeling the dynamics with a con- fining harmonic potential which experiences random bursts as a result of motor activity. This minimal model allows us to quantify the time scales of the active forces, along with the energy injected by the ensuing fluctuations.