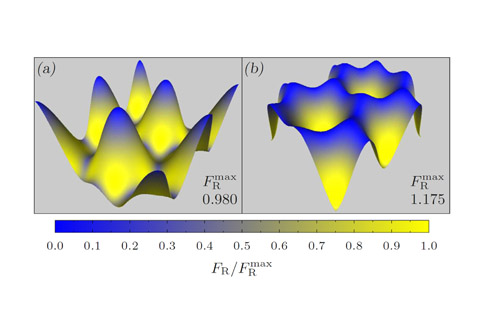 A new study reveals how hexagonal-patterned, self-organised hill structures emerge in 2D at the nanoscale due to redeposition following semi-conductor bombardment with low-energy ions.

Nanoscale worlds sometimes resemble macroscale roller-coaster style hills, placed at the tip of a series of hexagons. Surprisingly, these nanohills stem from the self-organisation of particles – the very particles that have been eroded and subsequently redeposited following the bombardment of semi-conductors with ion beams. Now, a new theoretical study constitutes the first exhaustive investigation of the redeposition effect on the evolution of the roughening and smoothing of two-dimensional surfaces bombarded by multiple ions. The results demonstrate that the redeposition can indeed act as stabilising factor during the creation of the hexagonally arranged dot patterns observed in experiments. These findings have been published recently.