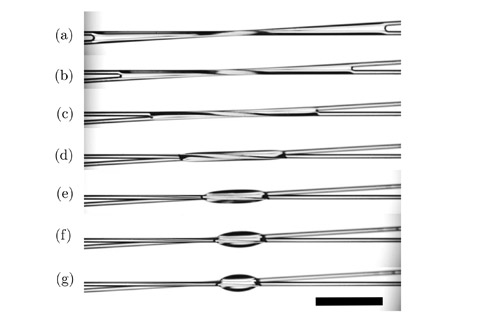 Evolution of the morphology of a drop of silicone oil on two touching crossed fibres.

Sandcastles are a prime example of how adding a small amount of liquid to a granular material changes its characteristics. But understanding the effect of a liquid wetting randomly oriented fibres in a fibrous medium remains a mystery. Relevant to the building industry, which uses glass wool, for instance, this phenomenon can be better understood by studying the behaviour of a liquid trapped between two parallel fibres. It can either remain in the shape of a drop or spread between the fibres into a long and thin column of liquid. Now, the authors have demonstrated that the spreading of the liquid is controlled by three key parameters: the amount of liquid on the fibres, the fibres’ orientation and the minimum distance between them. These findings, based on experimental and modelling work, were published recently.