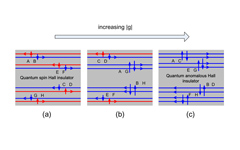 Transformation of edge states upon increasing the exchange field. For (b), it is a new type of topological insulator, where the QSH and QAH effect appear simultaneously.

The study of novel topological phases is the focus of intensive research efforts. Some theoretical works have recently been devoted to the understanding of the effect of staggered magnetic fluxes (SMFs) on the topological quantum phase transitions (TQPTs).

We consider in particular the effect of exchange field and its role in driving TQPTs. It is shown that the system becomes a new type of topological insulator in a certain parameter region, where the QSH and quantum anomalous Hall (QAH) phases coexist. It is hoped that this work will deepen the understanding of topological phases and motivate further developments in this exciting and rapidly developing field.