Superconductivity and magnetic order in ErPdBi (Vol. 45 No. 1)

Superconductivity and magnetic order in ErPdBi (Vol. 45 No. 1) 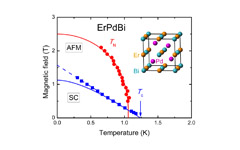 Half-Heusler compounds attract ample attention because of their flexible electronic structure. A new electronic state in this respect is the topological insulator, where the interior of the material is insulating, while the surface states are conducting. Surprisingly some of the topological half-Heusler compounds become superconducting at low temperatures. Topological superconductors are predicted to have a fully gapped unconventional pairing state in the interior, while the non-trivial topology gives rise to Majorana fermion states at the edge of the sample. The further interplay with magnetic order may lead to exotic superconducting phases.