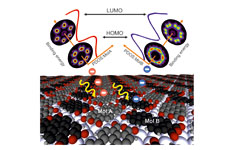 Schematics of the PTCDA/Ag(111) herringbone structure and a momentum space representation of its photoelectron angular distribution.

The alignment of electronic energy levels at interfaces strongly influences the electronic properties of multilayer systems like, e.g., organic thin films. One very powerful technique to investigate this level alignment and determine electronic binding energies is angular resolved photoelectron spectroscopy (ARPES). This method also allows assigning the spectroscopic resonances to molecular orbitals, since the angular distribution of the photoelectron yield can be understood as a fingerprint of the orbitals in momentum space. So far the possibilities of this emerging concept have only been demonstrated for low symmetric surfaces and adsorbates with only few molecular orientations.

This approach is extended to highly symmetric surfaces by studying the monolayer structure of the prototypical molecule 3,4,9,10-perylene-tetra-carboxylic-dianhydride (PTCDA) on the Ag(111) surface. This structure is particularly challenging since it contains two non-equivalent molecules per unit cell (Mol. A and B, see Figure) in six rotational domains, i.e., in total six differently oriented molecules of each type. However, the ARPES signal from both molecules could still be separated and an almost perfect match between the experimental data and the calculated moment space distributions was found for the highest occupied and the lowest unoccupied molecular orbital (HOMO and LUMO).

Furthermore, the contributions of both molecules to the ARPES data were analyzed regarding their binding energy by a two-dimensional fitting algorithm called “orbital tomography”. The result, (experimentally obtained) densities of states projected on molecules A and B (PDOS), turned out to agree very well with scanning tunnelling spectroscopy results reported earlier. The present findings clearly indicate that even for complex surface structures containing many differently oriented molecules the orbital tomography technique allows reliable investigations of the electronic structure of individual molecular species in thin organic films.