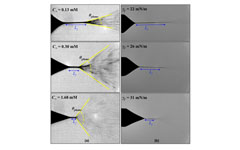 The micro-jet length Lj and nanoaerosol plume angle θplume are observed to be strong functions of the ionic strength C∞ and interfacial tension γf.

Proteomic mass spectrometry and chemical imaging require the generation of nanometer-sized charged water drops that are emitted in a precise direction. This is done with the remarkable ability of an electric field to sharpen a mm-sized spherical drop into a sharp cone with a universal half angle of 49 degrees, to emit a micro-jet at the cone tip and to breakup the charged micro-jet explosively into a plume of nanodrops, whose plume angle and charge per drop sensitively affect the measurement accuracy of the instrument. This paper captures the underlying nanoscale physics of DC electrospray with a combination of strong electrolyte theory, electrostatics, interfacial phenomena and potential spectral theory for geometric singularities. The electric field of the most singular harmonic near a cone that sharpens the drop is also shown to charge a nanoscale capacitor at the interface of the micro-jet, with a dimension of the Debye length. The interfacial charging increases downstream of the cone tip until the space charge separation is below the Bjerrum length, when the repulsive Coulombic energy between two charges exceeds the thermal energy. The resulting Coulombic fission accounts for the explosive breakup of the micro-jet into the nanodrop plume. The micro-jet length, the charge per nanodrop and the nanodrop plume angle as functions of ion strength are accurately captured by the theory as functions of the ionic strength and surface tension. Strong ionic strength and low surface tension produce the longest micro-jet, the smallest plume and the most precisely directed nanodrops.