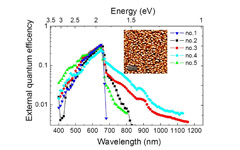 One of the most important challenges in seeking for competitive energy resources is to increase the efficiency of solar cells. The intermediate band solar cell promises highest efficiencies in a single gap device, since it allows for the absorption of below-bandgap photons via a subband located within the host material's bandgap. In order to generate an isolated subband, electronically coupled stacks of quantum dots (QDs) have been proposed. The built-in potential in the intrinsic region of the solar cell however unavoidably lifts the approximate degeneracy between the QD electron eigenenergies. Hence, the wave functions in adjacent layers would be electronically decoupled, resulting in carrier localization.

To avoid this effect and facilitate the formation of a QD-subband, the present work focuses on the integration of tailored quaternary AlGaInAs QDs. it deals with three major goals in quantum dot solar cell research: Increasing QD absorption by the fabrication of high areal density QDs, engineering the QD's bandgap to tailor their absorption range, and preserving the possibility to maintain an intermediate band despite the built-in potential being present in solar cell p-n-junctions. By a suitable choice of QD composition, shape and barrier thickness they show by simulations routes toward QD-IBSC designs, whereas they experimentally demonstrate a widened spectral absorption range. 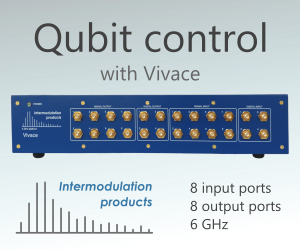