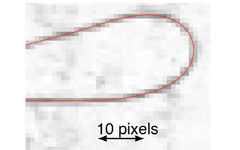 The problem of the accurate identification of a contour arises in many fields of physics. This contour can be an image of an elongated object, for example a fibre, a filament or a structure of larger dimension such as the cable of a bridge. It can also be a front of a physical event, such as a thermal or chemical front revealed by a convenient marker.

Current methods are optimized in the sense of the capacity of detection of a contour hidden in a noisy image, mainly for medicinal applications. The given information consists in a discrete set of locations (generally a set of pixels). Due to this discontinuous nature, the derivatives (slopes and curvatures) require a filtering and the result depends on its choice. However this knowledge is crucial for many applications. For example fluxes computations depend upon slopes; momentums on beams (in mechanics) depend upon curvatures.

The proposed method, issued from the Digital Image Correlation methods used in solid mechanics, is more focused on the precision of the identification, in the sense of metrology. It consists in the research of the best fit between the image of the physical contour and a virtual image, a curve roughly of the same thickness as the contour. This curve (the virtual beam) is defined analytically thus the obtained shape and its derivatives are smooth, given with confidence and defined at any scale of refinement.

The method can be easily extended to edge detection. It will also be possible to use an analytical expression of the considered problem thus the method will give its best coefficients, leading to a straightforward identification of the phenomenon from an unfiltered image.