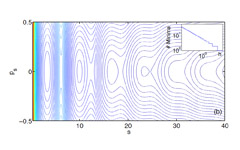 Phase space picture of the effective long-range interactions indicating many local equilibriums. (Inset: Number of minima as a function of the pitch of the helix).

Fundamental forces of nature such as the gravitational or Coulomb force mediated by the mass and charge of particles, respectively, decay according to universal laws with increasing distance between the particles. Still, these simple laws lead to the enormous beauty and amazing complexity of matter surrounding us.

In ultra-cold atomic physics the three-dimensional motion of neutral atoms or charged particles can be confined to a lower dimensional typically one- or two-dimensional trap by employing electromagnetic forces. If these traps are of curved character, which is possible e.g. in evanescent fields surrounding optical nano-fibres, they confine the motion to a curved low-dimensional manifold.

This opens the perspective of designing novel effective finite-range and possibly also long-range interactions since the dynamics is constrained to the curved geometry but the interaction takes places via the dynamically forbidden dimensions. The corresponding forces can now become oscillating with increasing distance between the particles and are widely tunable via the parameters of the confining curved manifold. Exploring as a prototype example the one-dimensional helix, it can be immediately shown that a plethora of local equilibrium configurations and consequently bound states emerge already for two particles even if the particles were repelling each other in free space. The number and depths of the local minima and wells can be tuned by modifying the pitch or curvature of the helix thereby establishing bound state configurations of different symmetries.

With an increasing number of interacting particles an ever-increasing wealth of symmetry-adapted and symmetry-distorted configurations create a very complex energy landscape exhibiting a dense spectrum of local equilibriums. It can be anticipated that the thermodynamical properties and quantum physics of the many-body interacting helical chain show novel structural properties such as enriched phase diagrams as well as an intriguing dynamical behaviour.