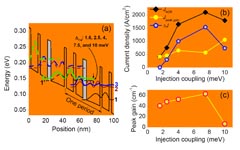 High-performance quantum-cascade lasers (QCLs) emitting at terahertz frequencies are highly expected for some practical applications, such as imaging and sensing. Though mid-infrared QCLs operating in room temperature and continuous wave mode had been achieved, the wavelength extension to terahertz is pretty difficult due to the large free carrier absorption loss and small subband energy spacing. The performance improvements of terahertz QCLs need advances in active region and waveguide designs.

Recently the injection coupling parameter has attracted much interest because it not only affects the injection efficiency but also determines the laser gain shape and peak gain values. A density-matrix based calculation showed that a much stronger injection coupling (18 meV) should be employed for high performance mid-infrared QCL designs and the simulation has been verified by experiments. 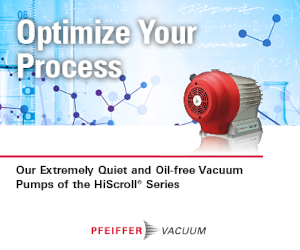