Optical evidence of nematicity in iron-based superconductors (Vol. 42, No. 3)

Optical evidence of nematicity in iron-based superconductors (Vol. 42, No. 3) 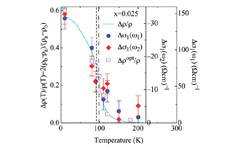 Temperature dependence of the dichroism Δσ1(ω)=σ1(ω,E||a)-σ1(ω,E||b) for x=0.025 at selected frequencies compared to the dc anisotropy ratio (Δρ/ρ). The anisotropy in the dc limit of the optical conductivity (Δρopt) is reported, as well. The vertical dashed and dashed-dotted lines mark the magnetic and structural phase transitions, respectively.

A nematic order recently arose as a robust electronic state describing the nature of the pseudogap phase in the high-temperature superconducting cuprates. In the field of liquidcrystals, a nematic statederives froma transitionbreaking the rotational symmetry of the high temperaturephasebutpreserving the translational one. Besides the cuprates, the novel iron-based superconductors in their parent and underdoped phase recently emerged as an alternative playground for studying an electron nematicity in a correlated system.

The iron-arsenide superconductors harbor indeed an anti ferromagnetic ground state, which is either preceded or accompanied by a structural tetragonal-orthorhombic phase transition at Ts. This structural transition breaks the four-fold symmetry of the high-temperature lattice and leads to an anisotropic conducting state. This broken rotational symmetry has thus a direct impact in the optical properties.We investigate the optical conductivity σ1(ω) with light polarized along the in-plane orthorhombic a- and b-axes of Ba(Fe1-xCox)2As2 for x=0 and 2.5% under uniaxial pressure across their phase transitions. The charge dynamics on these detwinned, single domain samples reveals an in-plane optical anisotropy (i.e., linear dichroism) which extends to relatively high frequencies and at T>Ts. This reveals substantial nematic susceptibility as well as the electronic nature of the structural transition. Another key result consists in the opportunity to disentangle the distinct behaviours of the Drude weights and scattering rates of the itinerant charge carriers,which are both enhanced along the a-axis with respect to the b-axis. Our findings allow us to clarify the long-standing striking anisotropy (ρb>ρa) of the dc resistivity.