Graphene transport with a polymer electrolyte gate (Vol. 42, No. 2)

Graphene transport with a polymer electrolyte gate (Vol. 42, No. 2) 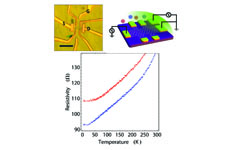 The figure shows the temperature dependence of graphene resistivity at high (red) and intermediate (blue) carrier densities. Since phonon modes follow the Bose-Einstein law, the scattering of electrons from acoustic phonons is strongly suppressed at low temperatures, thus leading to power-law dependence. The temperature scale that determines this suppression increases linearly with the Fermi level. At high doping, the resistivity is weakly density-dependent. A detailed analysis shows there is an important contribution from neutral weak scatterers. Top panel: Optical image and schematics of graphene device coated with polymer electrolyte gate.

The electronic properties of graphene have received wide recognition, most notably the award of the 2010 physics Nobel Prize. In graphene's two-dimensional hexagonal lattice, the electrons behave as massless chiral Fermions obeying the Dirac equation. The exotic nature of these quasi-particles and their low carrier density is at the heart of several interesting phenomena, including the unconventional quantum Hall effect and Klein tunneling. Raising the density of charge carriers in graphene can have several implications including the possibility for van Hove singularity driven high-Tc superconductivity. From a fundamental point of view, the high carrier densities substantially modify the interactions between quasi-particles in this two-dimensional crystal.

In this report, graphene devices in Hall-bar geometry are gated with a polymer electrolyte to realize carrier densities an order of magnitude higher than achieved by conventional methods. At these densities, the carriers sufficiently screen the long-range interactions. This allows fully appreciating the importance of various neutral defects on the graphene lattice. In contrast to metals, the temperature scale for quantum suppression of acoustic-phonon scattering in graphene is significantly gate-tunable. The phenomenon is readily observed to high temperatures at high carrier densities.