A more efficient plasma sterilizer for medical devices (Vol. 41, No. 5)

A more efficient plasma sterilizer for medical devices (Vol. 41, No. 5) 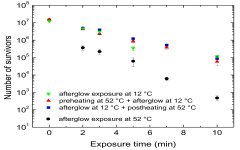 Bacterial endospores, the most resistant microorganisms, can be inactivated by exposure to UV photons of the outflow of an N2-O2 discharge at reduced pressure (5 Torr). These photons are formed through N and O atom collisions in the discharge afterglow, which generate NOγ excited molecules emitting in the 180-270 nm range (UV-C). Some of these N and O atoms can diffuse prior to combining into NO molecules, ensuring, contrary to UV lamps, inactivation within holes and crevices. These photons create lethal damage to the spore DNA, at a rate that increases with the spore-deposit temperature. At 68 °C, the number of survivors of B. atrophaeus spores after a 30 min exposure is one log less compared to 28 °C, hence a shorter sterilization process. Such behaviour occurs only when heat is applied, neither before nor after, but simultaneously with UV photons (figure): inactivation does not result from the addition of sub-lethal damage caused independently by UV radiation and by heat.

Heat provides the energy required to surmount the (small) potential barrier(s) encountered as the chemical reaction leading to the DNA lesion, once initiated by photon excitation, proceeds. The energy barrier corresponds to molecular (conformation) rearrangements, as the reaction develops to reach the final chemical state on the DNA strand. Assuming Arrhenius-law dependence on temperature, the activation energy supplied by heat is 54 kJ/mol compared to that by photoexcitation, estimated ∼ 440-460 kJ/mol, as for many chemical reactions. To the authors' knowledge, it is the first time that such a genuine synergy effect is demonstrated.