Many quantum technologies—such as cryptography, quantum computing and quantum networks—hinge on the use of single photons. In the present paper, the authors have identified the extent to which photon detector characteristics shape the preparation of a photon source designed to reliably generate single photons. They determined the value of key source parameters that are necessary to generate high-fidelity single photons.

The problem with photon detectors is that they can be noisy or have a limited ability to detect single photons. Some cannot identify the number of photons; they can only detect their presence. Given the influence of these factors, improving the fidelity of single-photon generation is very challenging.

The authors simulated which photons would be obtained from different initial sources. This led to outline the conditions under which the heralding detector can deliver good resolution of the number of photons, as a means of improving the reliability in obtaining single photons. Using two experimental detectors checked these findings.

Instanton filtering for the stochastic Burgers equation (Vol. 44 No. 3) 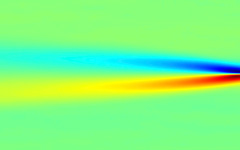 Extreme events in stochastic nonlinear systems play an essential role in nature. Characterizing their likelihood is a fundamental albeit challenging problem since the tails of the underlying probability distributions are usually non-Gaussian and governed by saddlepoints of the corresponding path integrals, so-called “instantons”.

Understanding intermittency in turbulent systems is still one of the open problems in classical physics. Since intermittency is governed by the non-Gaussianity of rare fluctuations, instantons might offer a way to better understand the behavior of turbulent systems. In the present work we concentrate on rare fluctuations in Burgers turbulence and we address the question whether one can identify instantons in direct numerical simulations of the stochastically driven Burgers equation. This is of special importance since this demonstrates that instantons indeed form the skeleton of rare turbulent fluctuations. For this purpose, we first solve the instanton equations using the Chernykh-Stepanov method [Phys. Rev. E 64, 026306 (2001)]. These results are then compared to direct numerical simulations by introducing a filtering technique to extract prescribed rare events from massive data sets of realizations. Using this approach we can extract the entire time history of the instanton evolution, which allows us to identify the different phases predicted by the direct method of Chernykh and Stepanov with remarkable agreement. 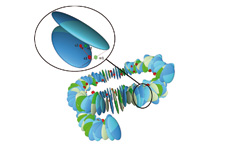 Schematic representation of the model

Scientists have for the first time accurately calculated the sliding mechanism for deciphering the second genetic code written within the DNA base pair sequence.

Three quarters of the DNA in evolved organisms is wrapped around proteins, forming the basic unit of DNA packaging called nucleosomes, like a thread around a spool. The problem lies in understanding how DNA can then be read by such proteins. In the present paper, the authors have created a model showing how proteins move along DNA.

A basic computer model of the nucleosome is developed, in which DNA is described by a sequence of rigid blocks representing the base pairs. The idea is that a small defect in the form of a missing or extra base pair enters the DNA section wrapped around a nucleosome. This defect can then diffuse through the wrapped DNA and once it leaves the other end of the wrapped section, the nucleosome moves by the extra or missing length that the defect carried with it.

This model supports the idea of a second genetic code, consisting of a mechanical code written down within the base pair sequence and multiplexed with the traditional genetic code. 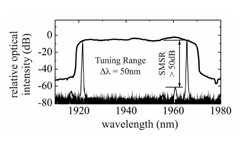 It is the increasing demand of safety at work and also at home, which acts as the driving force for new developments in nanotechnology and laser physics. Hazardous and toxic gases are representing maybe the most severe risk as being invisible, fast, deleterious and partially lethal in its effect. Handheld systems, which can be used for the on-site detection of these gases, are of huge interest these days. With the present Surface Micro Machined (SMM) Micro-Electro-Mechanical-System Vertical-Cavity-Surface-Emitting-Lasers (MEMS VCSEL) devices, the key technology for these systems has been realized. VCSELs are vertically emitting laser devices with extremely low thresholds but sufficiently high optical output power for gas sensing applications. A monolithically integrated membrane as top reflector on every single VCSEL device (described by the acronym MEMS) serves as deflectable element, which can be actuated both, electro-thermally and electro-statically. The generated air-gap underneath can be continuously changed by this technique and hence the emission wavelength. This enables continuous scanning over specific gas absorption lines. The present lasers are the first widely tunable ones in this wavelength range. Devices with 50 nm of continuous tuning, 50 dB of side mode suppression ratio (30 dB would already be sufficient for sensing applications), peak optical powers of 1 to 2 mW and extremely low threshold current densities of 2.2 kA/cm2 are perfect for this application.

Measuring Higgs couplings at a linear collider (Vol. 44 No. 3) 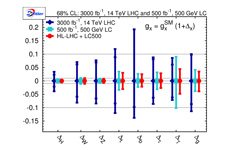 Expected precision for Higgs coupling measurements for the HL-LHC, ILC and the combination of the HL-LHC and the ILC.

In 2012 the experiments ATLAS and CMS discovered a new particle in proton-proton collisions at CERN's Large Hadron Collider (LHC). The measurements show that the properties of the particle are compatible with those predicted for the Higgs boson of the Standard Model. In the article we estimate the precision with which some of the fundamental properties of the particle, its couplings to other particles, can be measured including theoretical errors, at a high-luminosity LHC (HL-LHC), a linear electron-positron collider and the combination of the two. The uncertainties are expected to be better than 1% for a single parameter modifying all Higgs couplings simultaneously, and at the percent level if all relevant couplings are left free and independent of each other. The combination of the measurements at the two machines improves on the uncertainty of each one of these. Thus a HL-LHC and a linear collider form a dream team to study the properties of the Higgs boson with high precision.

Gauge theory of topological phases of matter (Vol. 44 No. 3)

Topologically protected states of matter are the focus of recent intensive research efforts. Such states may play an important role in future concrete implementations of devices for topological quantum computing. Prominent examples are incompressible 2D electron gases exhibiting the Quantum Hall effect or the spin Hall effect, 3D topological insulators and superconductors, etc. From a conceptual point of view it is important to note that the low-energy effective theories describing all these states can be derived, using only very general principles, from a unified theoretical framework which we have called “gauge theory of states of matter”.

A key idea underlying our framework is to promote fundamental or emergent global symmetries of idealized systems to local gauge symmetries of realistic systems, and to then study the response of such systems under variations of the corresponding gauge fields. For systems with a bulk energy gap, our theory predicts the general form of the response laws, transport equations, and the structure of gapless surface modes. It also elucidates how the structure of the ionic background, electromagnetic fields, velocity fields and curvature influence the properties of such systems. 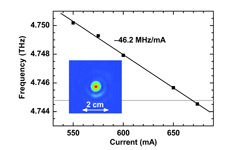 Frequency tuning using the applied current and beam profile of the local oscillator. The gray horizontal solid line indicates the frequency of the oxygen line.

Quantum-cascade lasers for the terahertz spectral region are promising light sources for several spectroscopic applications, despite currently only operating at cryogenic temperatures. The authors developed a local oscillator to be used in an airborne heterodyne receiver for the investigation of interstellar atomic oxygen. The challenge for the design consists in the simultaneous fulfilment of demanding specifications for a set of operating parameters.

The developed laser emits a single mode with an optical power of about 0.5 mW and an almost Gaussian beam shape. The laser mode can be tuned using the applied current to cover about 5 GHz in the vicinity of 4.745 THz. The local oscillator, which is based on a distributed-feedback laser combining a quantum-cascade laser with a single-plasmon waveguide and a lateral first-order grating, can be operated in a cryogen-free cooler in continuous-wave mode. The developed quantum-cascade laser exhibits large wall-plug efficiency over a wide range of current densities with a negligible spectral shift of the gain maximum in order to achieve the required tuning range. 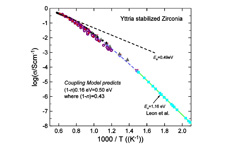 Yttria stabilized zirconia, also known as YSZ, is a material of great interest because of its relatively high oxygen-ion based conductivity. In particular, it finds applications in electrochemical devices, such as solid oxide fuel cells and oxygen sensors. The present work developes a model of the oxygen-ion dynamics contributing to the conductivity of YSZ. The problem is that fuel cells currently operate above 700 ºC, which strongly limits their use. Understanding oxygen-ion diffusion is key in helping lower operating temperature towards ambient. Previous attempts to do so were done with the so-called coupling model (CM), describing simple physical concepts related to ion-ion interaction. This helped uncover the importance of ion-ion correlation in limiting long-range ion mobility, and thus conductivity.

The trouble is that experiments show that ionic conductivity in YSZ requires an activation energy that is much higher than that supplied by computer simulations describing independent ion hopping. Relying on the CM model, the authors first established a quantitative description of the ion dynamics in YSZ. Then they compared the predictions of the CM with experimental results and with simulations, particularly those of nanometric-scale thin films, published in the last ten years.

Thus, the present model establishes the connection between the level of the energy barrier for independent ion-hopping simulations and the level of activation energy of long-range oxygen ions measured experimentally. This model could also be used to study the conductivity relaxation of so-called molten, glassy and crystalline ionic conductors and ambient temperature ionic liquids.