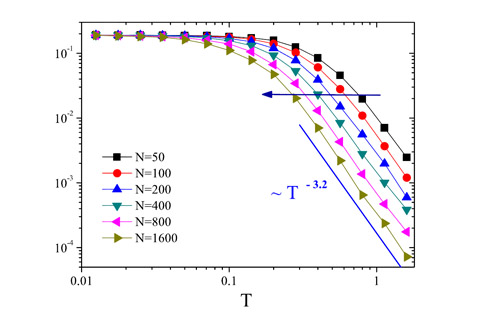 Study finds the law governing how heat transport scales up with temperature.

How heat travels, matters. Yet, there is still no consensus on the exact physical mechanism that causes anomalous heat conduction—despite the existence of previous numerical simulation, theoretical predictions and experimental observations. Now, the authors have demonstrated that electron transport depends on temperature. It follows a scaling governed by a power law—and not the exponential scaling previously envisaged. These findings were published recently. Heat conduction depends on the internal energy transferred by microscopic diffusion and collisions of particles, such as electrons, within a given body. Anomalous heat conduction can be best studied in a particular kind of model: one that accounts for the thermal transport in a one-dimensional (1D) lattice. In this study, the chosen 1D model is dubbed the coupled rotator lattice model. The authors systematically investigated how heat conductivity changes with temperature. This approach led them to the thesis that heat conductivity correlates with a power law, instead of an exponential scaling as previously predicted. Further, this phenomenon occurs without a transition temperature above which the heat conduction is normal and below which it is anomalous.