Atom distributions in a low-pressure He-Xe discharge (Vol. 43 No. 2)

Atom distributions in a low-pressure He-Xe discharge (Vol. 43 No. 2) 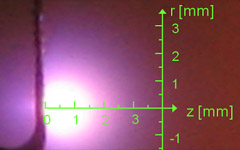 Visible emission of the discharge in the mixture He+2%Xe, pressure - 5 Torr, discharge current 40mA. Top: overview of the cathode region; bottom: magnified view of the spot plasma and the scale for the characteristic sizes.

Low-pressure glow discharges in mixtures of xenon with rare gases are used for lighting purposes in mercury-free fluorescent lamps. Over the last decade investigations have been carried out on their output characteristics in dependence on parameters such as mixture composition, pressure, discharge current and operation mode. However, the lifetime of these types of fluorescent lamps is limited by the performance of the electrodes and their interaction with the surrounding plasma. When using a flat oxide cathode a hot spot and a plasma can be generated. This spot mode changes the plasma-cathode interaction and prolongs the lifetime. The source of the plasma is localized in a very narrow region, but the plasma size is much bigger than the hot spot size. Outside of the cathode spot the plasma is sustained by transport of excited species, namely xenon atoms in the metastable and resonance states. Therefore, the discharge in spot mode can be used for investigations of the role of various transport mechanisms.

In the present work the method of laser atom absorption spectroscopy was used to measure the spatial distribution of excited xenon atoms in radial and axial dimensions. The analysis of the experimental results have been performed by means of numerical model which comprises the solution of the transport equations for metastable and the resonance atoms. Various approximations for the description of particle and radiation transport have been considered. It has been shown that the expansion of the plasma is mainly caused by transport of the resonance radiation. Suggested numerical method can be further used for precise description of density distribution of excited atoms and predictions of output characteristics of luminescent lamps.